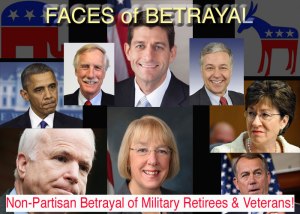 Paul Ryan, Patty Murray, Susan Collins, Mike Michaud, Angus King, Harry Reid, John Boehner, John McCain, Barack Obama and most of their colleagues (a majority of the U.S. Congress) have broken trust with military retirees and veterans with the so-called Non-Partisan Budget Act hatched by Paul Ryan and Patty Murray. While protecting union-backed civilian employees’ pensions, these hacks have thrown military retirees and veterans past, present, and future under the bus. Ryan said his goal is to “eliminate waste.” Apparently those that have sacrificed so much for so many years are just a waste and are expendable. These republicans, democrats, and independents should be ashamed of themselves. One wonders if there is any hope left for this nation once a proud advocate of freedom and once grateful to those that protected those freedoms. Now their promised benefits are being eliminated as a terrible waste, while civilian counterparts, who get substantially more pay & benefits, will continue to enjoy full pensions and cost of living increases. I am so done with the establishment politicians and so-called independently thinking moderates that are really just elitists protecting their lobbyists henchmen and don’t have a clue or give a damn for military members. Disgusted!